New Venture, A New Radio Show for Veterans and their Families 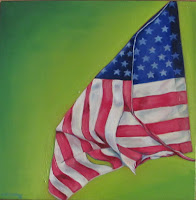 I will host my first radio program called Vet Net beginning on November 11 at Huntley Community Radio broadcasting on 101.5 FM as WHRU-LP. (http://huntleyradio.org)

Below you will find a brief description of the show:

Every year in November we honor and remember all veterans who have served in all wars. This program will acknowledge and honor these brave Americans every day.  The title of the show is Vet Net, short for Veterans Network.  The title came from Jeanine's sister Sharon Hill Sprenger, an Air Force and National Guard veteran.  On this new show we will feature women and men who will share their stories of sacrifice while serving their country.  Take a few minutes out of your busy day and meet a local veteran through their stories of service.  In addition informational programs for veterans in the region will be announced about services available for the local veteran community.

In honor of Veterans Day the first show will air on November 11 at 5:00 p.m.   My guest Alan Belcher will share his stories of service in the US Army during the Vietnam War and life after his return home from war.  He is a counselor and founder of Transitional Living Services located in Hebron, IL.  TLS provides housing and services for homeless and disabled veterans and their families in McHenry County.

Huntley Community Radio, Ltd (HCR) is a community oriented, volunteer run, 501(c)(3) Illinois not-for-profit corportation.   You can listen to live broadcasts on your remote device or computer, and catch the programs after they are aired as podcasts on their web site.

Posted by Jeanine Hill-Soldner Fine Art at 11:15 AM Links to this post

Happy to be Exhibiting in Two Shows for Chicago Artists Month

The cooler weather and the rustling leaves of fall are here ushering in October and time for Chicago Artists Month.  The City is bursting at the gallery doors with art shows and performances.  There are so many committed artists in the Chicago area that bring  bring a special energy to the cool Midwest days of Autumn. I am so glad to be a part of the City art scene where artists are appreciated and celebrated.  Here's a brief overview of the two shows where my art is on exhibit. 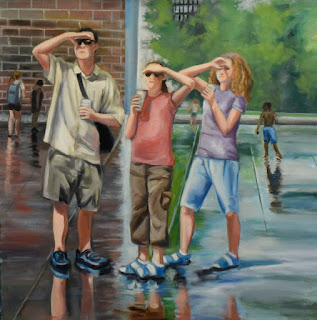 The Artists Breakfast Group (ABG) is partnering with the Chicago Society of Artists (CSA) for a shared exhibit as featured in Chicago Artists Month, at the Old Town Art Center Triangle  Gallery, 1763 N. North Park, Chicago.
Gallery hours: Tuesday through Friday, 10 am to 5 pm, Saturday, 10 am to1 pm.
Closed Mondays, www.oldtowntriangle.com

Chicago Women's Caucus for Art Exhibit
Beyond the Studio

The artist reception for both shows, Caffeine IX and Beyond the Studio where on October 11, my birthday.  My dear friend Bert Leivelle brought me a birthday cake, replete with candles to the the CWCA reception.  Everyone was so delighted and I was surprised and delighted by Bert's thoughtfulness.

If you're in Chicago during October please take time to visit one of the galleries and enjoy the art by outstanding artists in the region.


Posted by Jeanine Hill-Soldner Fine Art at 7:51 AM Links to this post

Pushing the Depth in New Painting

More paintings to do in my continuing interest in the light, color, people and energy at Crown Fountain in Chicago.  I am drawn to the complexity and the challenge of pushing the depth that can be achieved on a flat surface.  The people moving and interacting with one another and the water is a continuing source of interest for me as a painter.  The process is the most important part of my work, the finish product is the result of total focus and always trying new ways of working while learning where my next brush stroke will take me.
This painting will be number 39 in my body of work about water.  I can't wait to get started on my next drawing and painting!
Posted by Jeanine Hill-Soldner Fine Art at 1:15 PM Links to this post 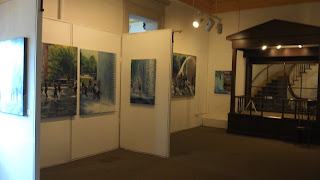 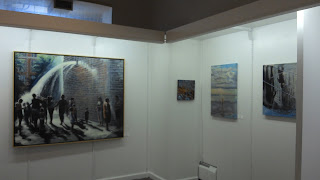 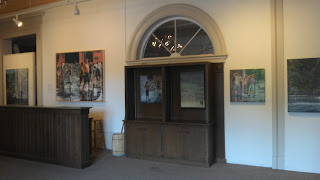 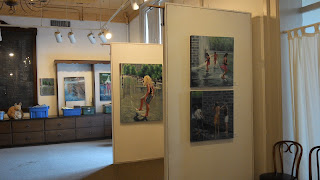 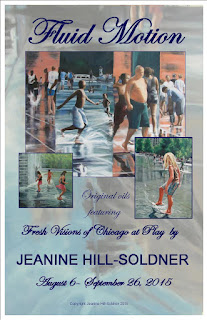 I just finished installing my latest exhibit that will show for two months at the Old Courthouse Art Center, 101 N. Johnson St.,  in Woodstock. The artist reception will be held on Friday, August 14 from 6:00- 9:00 p. m. on the same night as the Second Friday Art Walk on the Square in Woodstock.  The Pat Rotello Retrospective and Claymirth opening will be on the same night.  There will be music and art and lots of fun events.  What a great way to enjoy a late summer evening in the Midwest!

Posted by Jeanine Hill-Soldner Fine Art at 7:55 AM Links to this post

In early June I returned from a fabulous week in Spain with my husband Keith and said goodbye to our friends from Berlin Yvonne and Carlo.  It was my first time in Spain and everything about the country was worth a second visit.  But that's another story with loads of beautiful photos.  For now I want to share with you another adventure, this one of the artistic kind.
A week after returning from Spain I received an e mail from  fellow Lakeside Legacy Arts Park resident artist Sara Barkley.  Sara was passing on a message that the owner of The Cottage Pub in Crystal Lake was looking for someone to paint a mural for his restaurant and install it in two weeks.  I contacted The Cottage and spoke to Paul Leech, the owner.  I met with him the following day, took measurements of the wall, after calculating the materials cost and time it would entail I came up with the price that we agreed upon.

Here is some of the Backstory that makes this project interesting:

The mural will be created in  less than 2 weeks in my studio located at the Lakeside Legacy Arts Park.  The owner of The Cottage Paul Leech is from Liverpool and I lived near Liverpool at one time and did post grad independent study at Liverpool University and my husband was a graduate teaching assistant.
The theme for the mural is  Matthew Street in Liverpool, location of the Cavern Club, where the Beatles performed in the early part of their careers.  I’ve been to England a number of times and visit Matthew Street when I am there.  The mural will be complete by Thursday June 18 and the installation at the Cottage will be on June 19.


To better explain the painting process, installation and final event weekend I have put together an album with a few captions.  Needless to say I had a great time with this whole mural project from beginning to end.  The many years of had work in my studio, constantly refining my craft and never shy about taking on new challenges all came to together for the "Mathew Street Install".

The Northwest Herald  featured the mural and weekend event at The Cottage in the Thursday entertainment section of the paper.

I measured the height and length of each wall section making room for the windows. I had to accommodate the step up to the deck and elevate the canvas off of the pavement to ensure a consistent look to the mural.  Each panel was hand cut, assembled and stretched.  Most people were unaware that the brick wall was actually a painting. 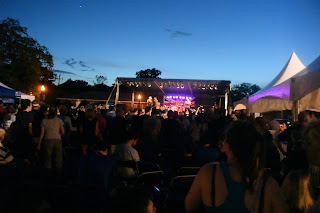 Posted by Jeanine Hill-Soldner Fine Art at 11:35 AM Links to this post

Installation of "Fluid Motion: Fresh Visions of Chicago at Play" 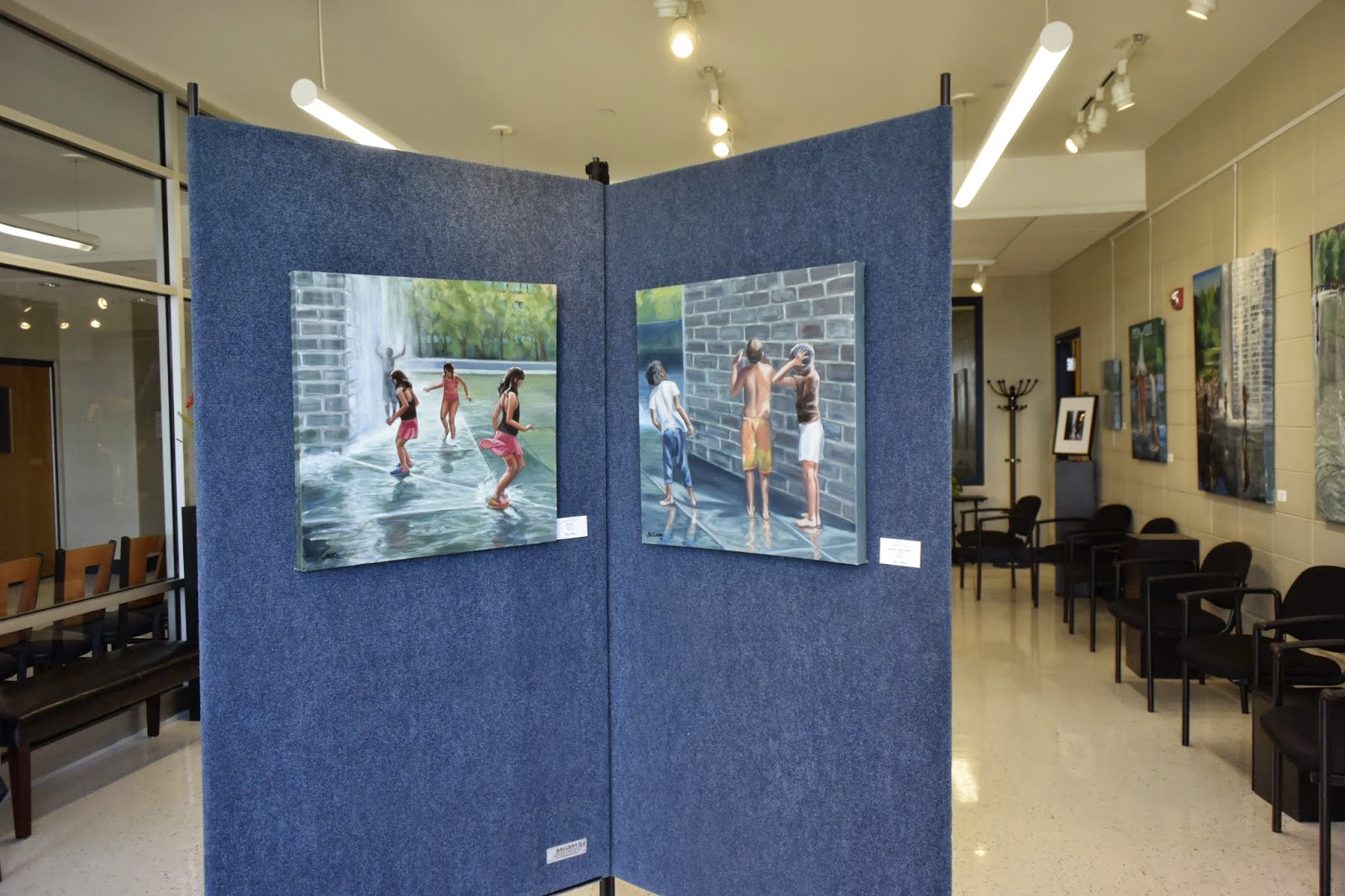 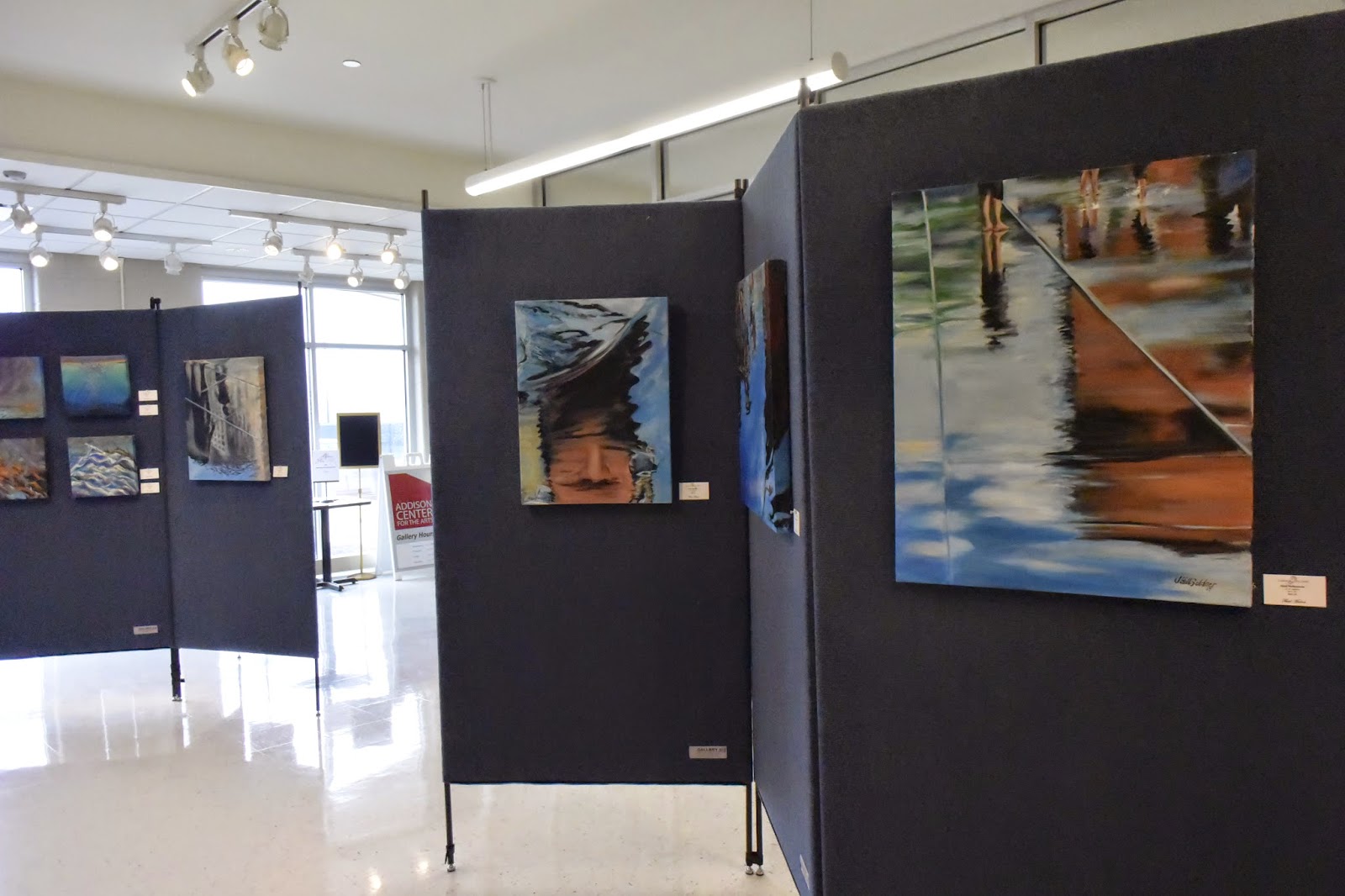 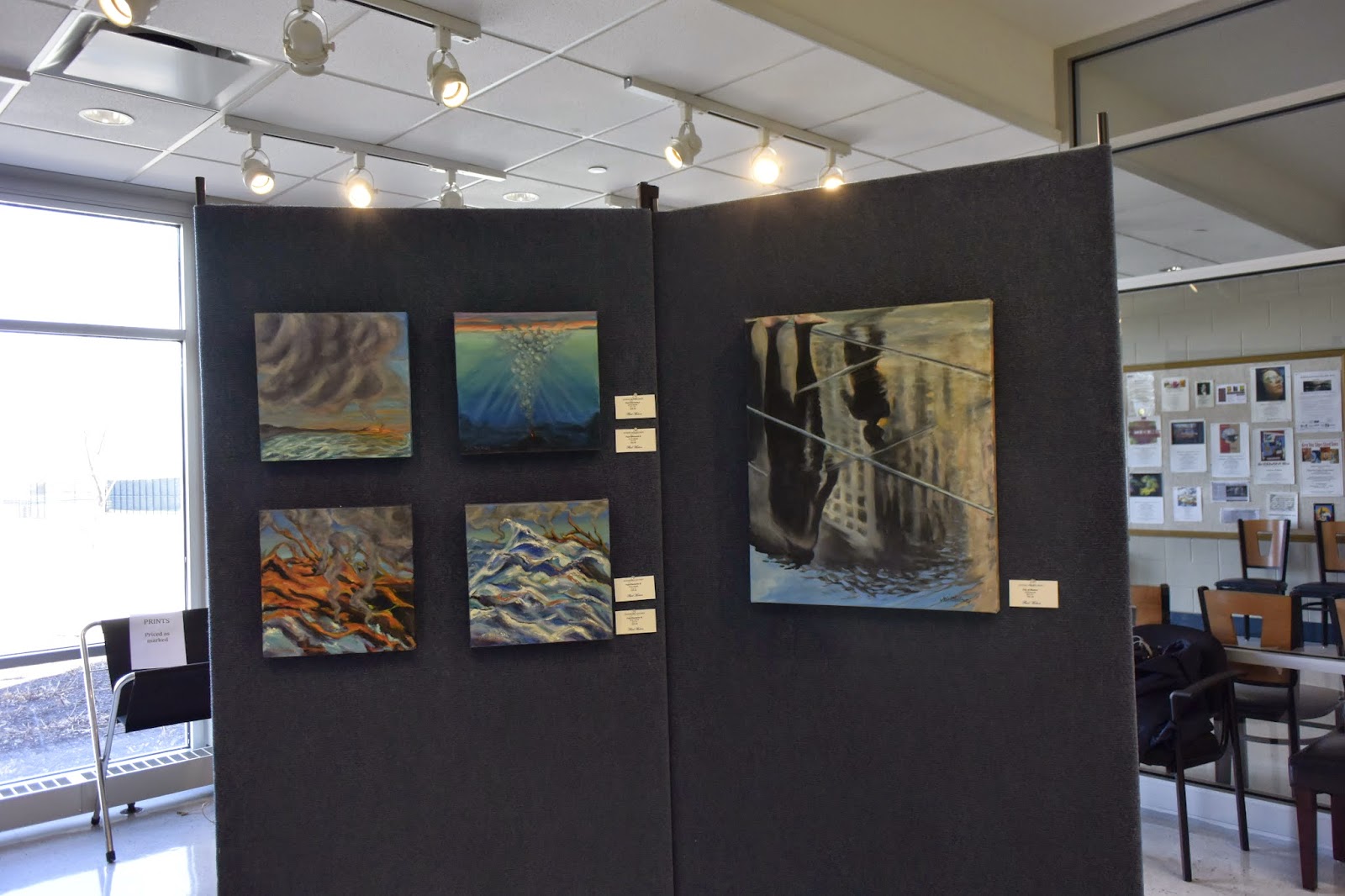 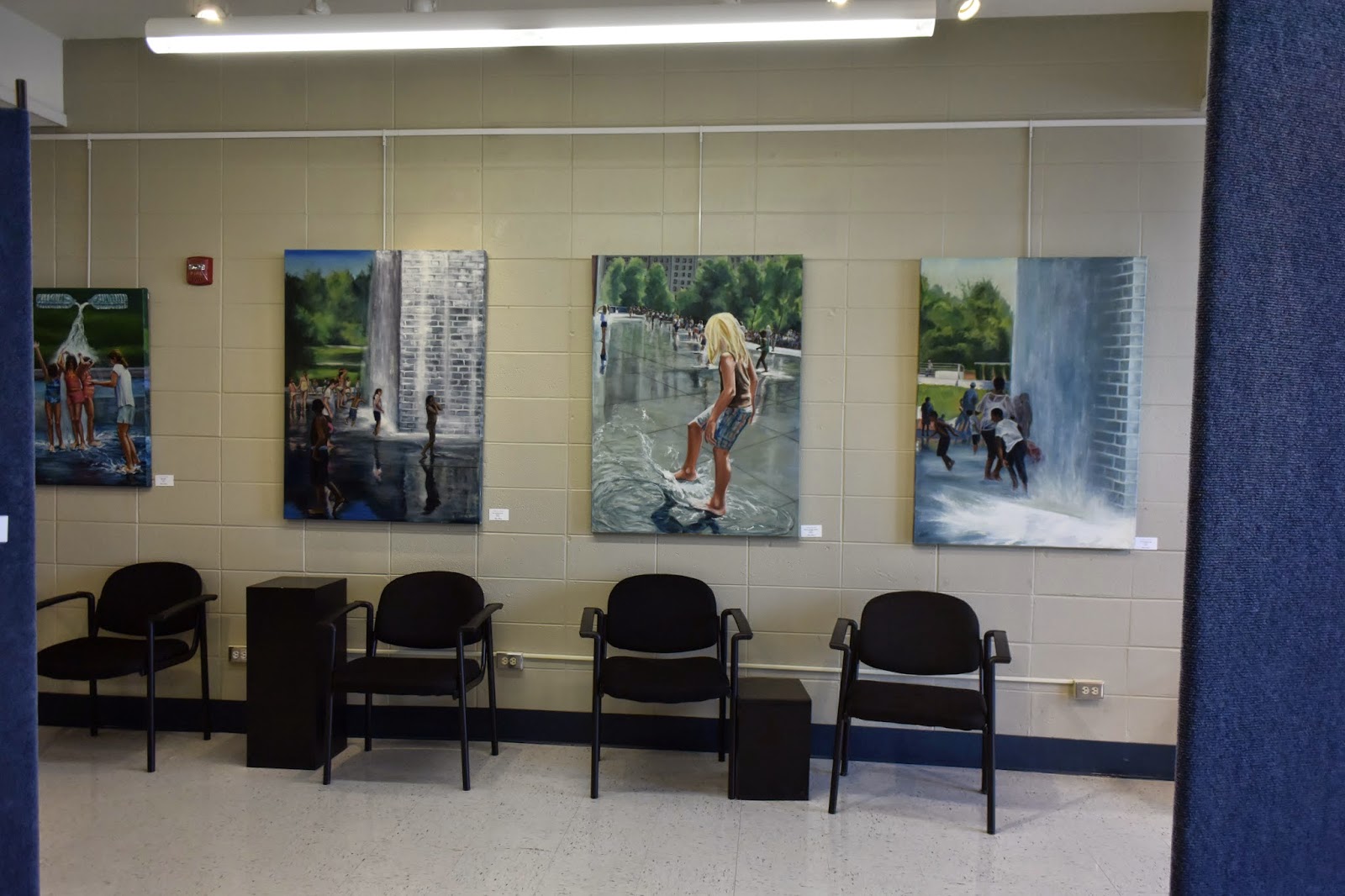 Posted by Jeanine Hill-Soldner Fine Art at 1:06 PM Links to this post

Posted by Jeanine Hill-Soldner Fine Art at 10:27 AM Links to this post 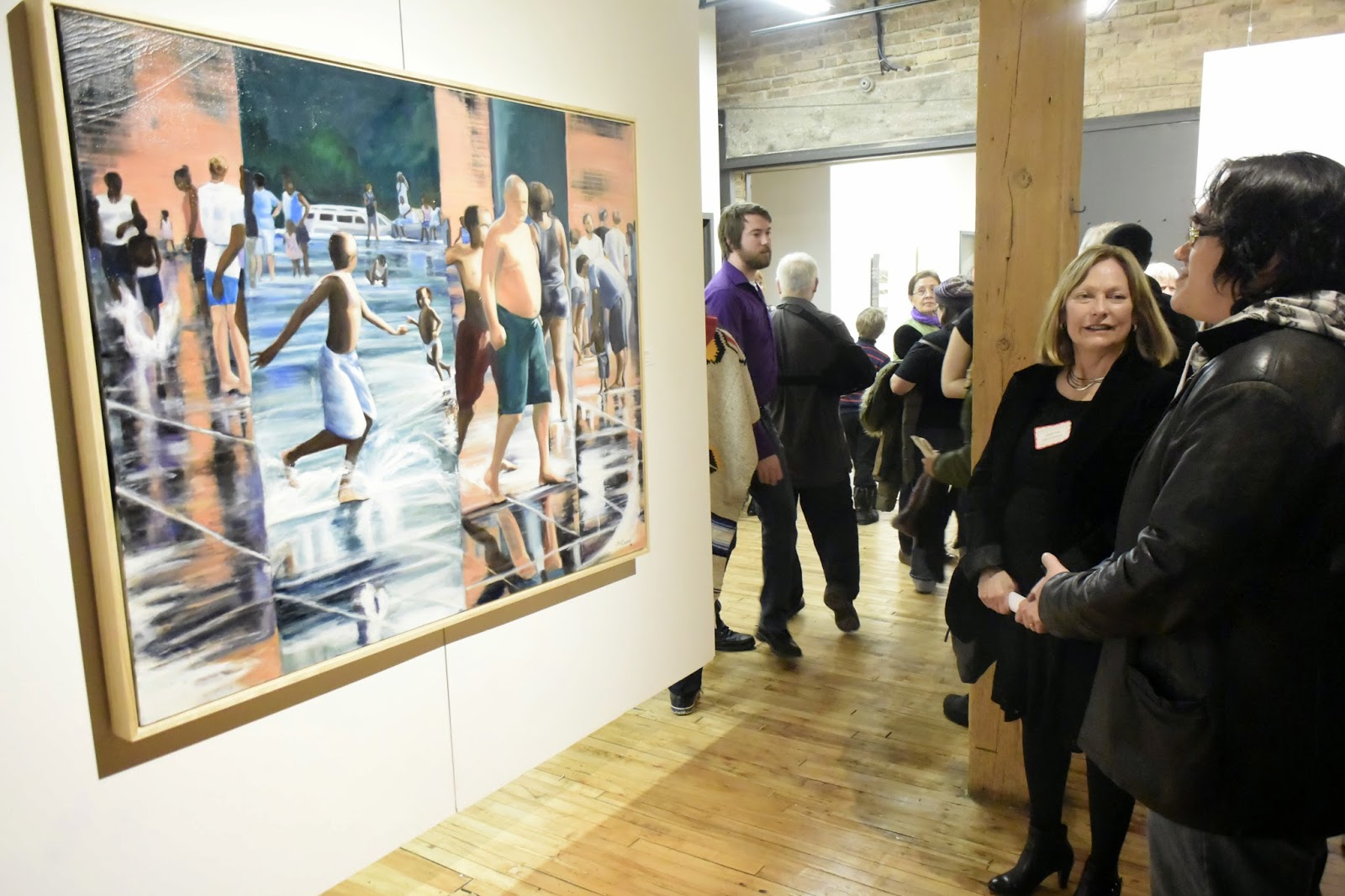 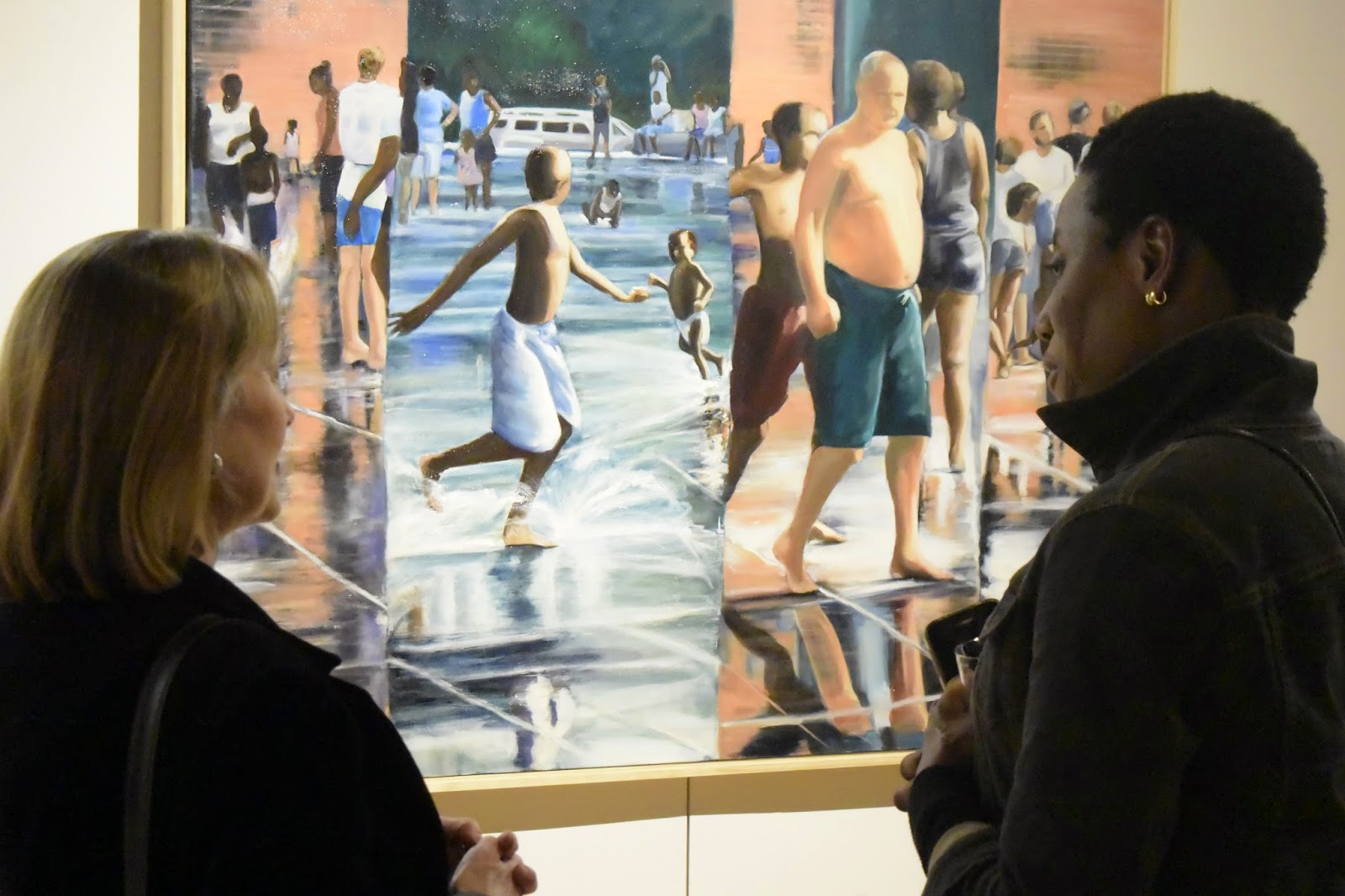 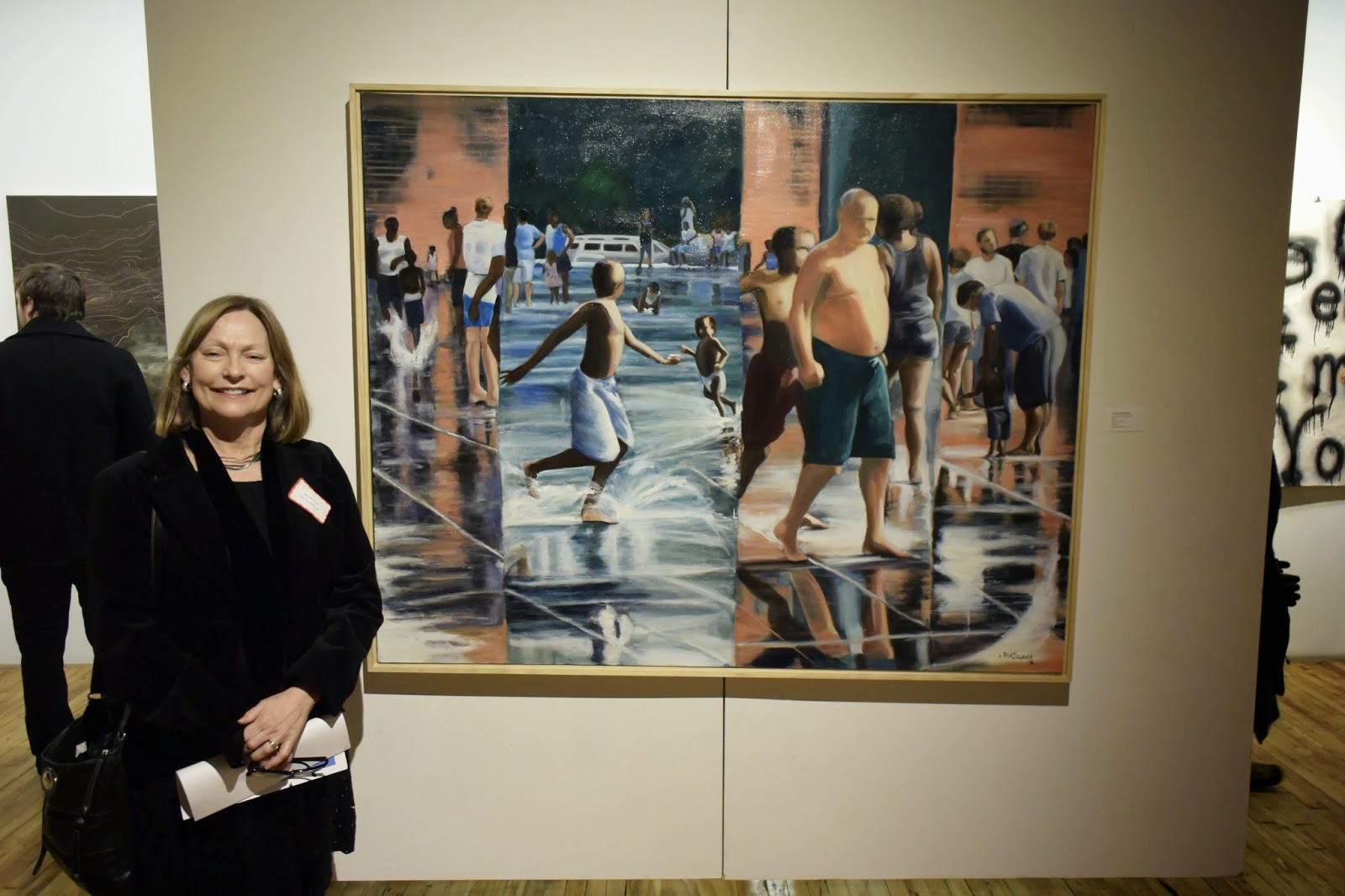 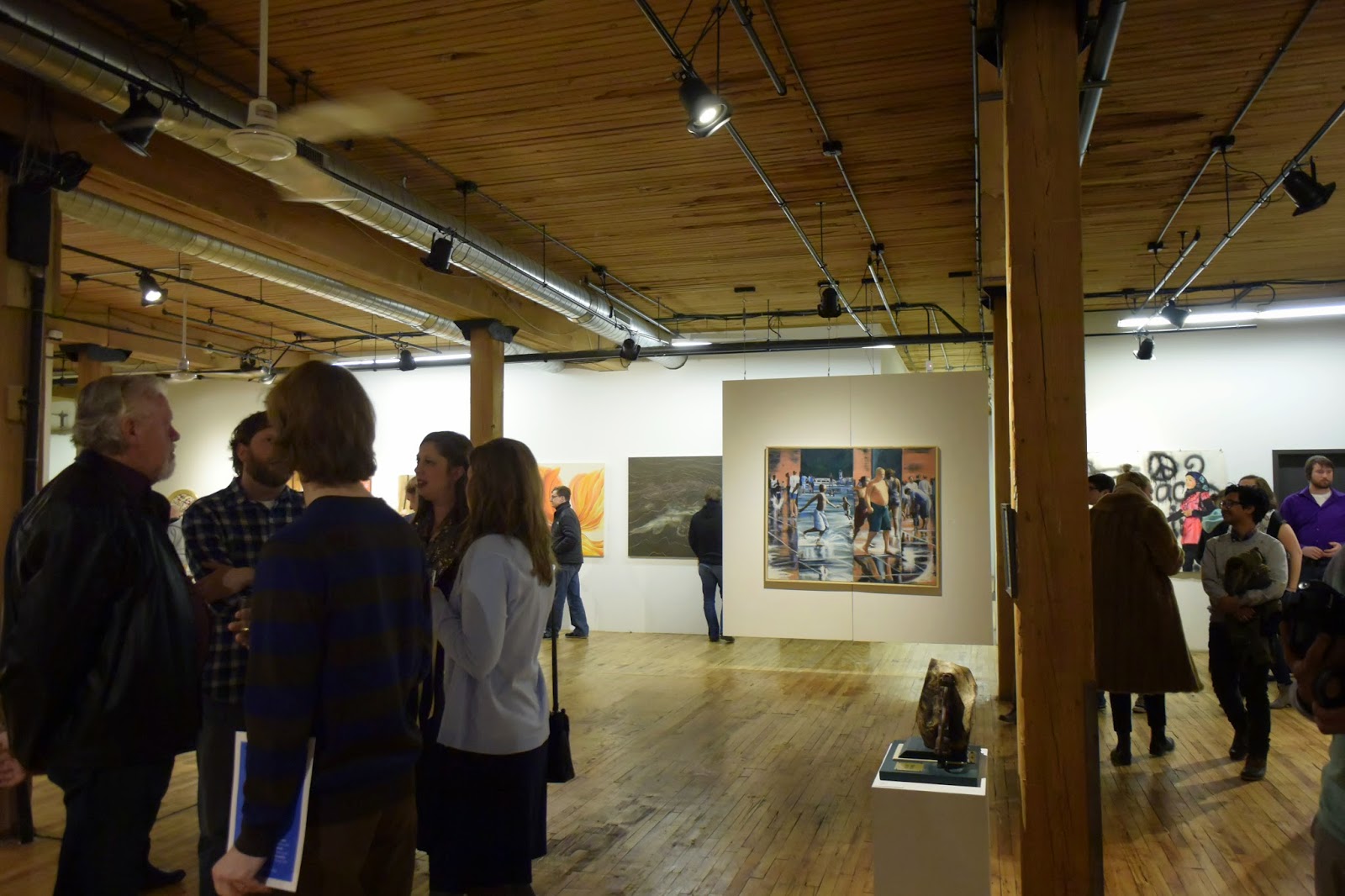 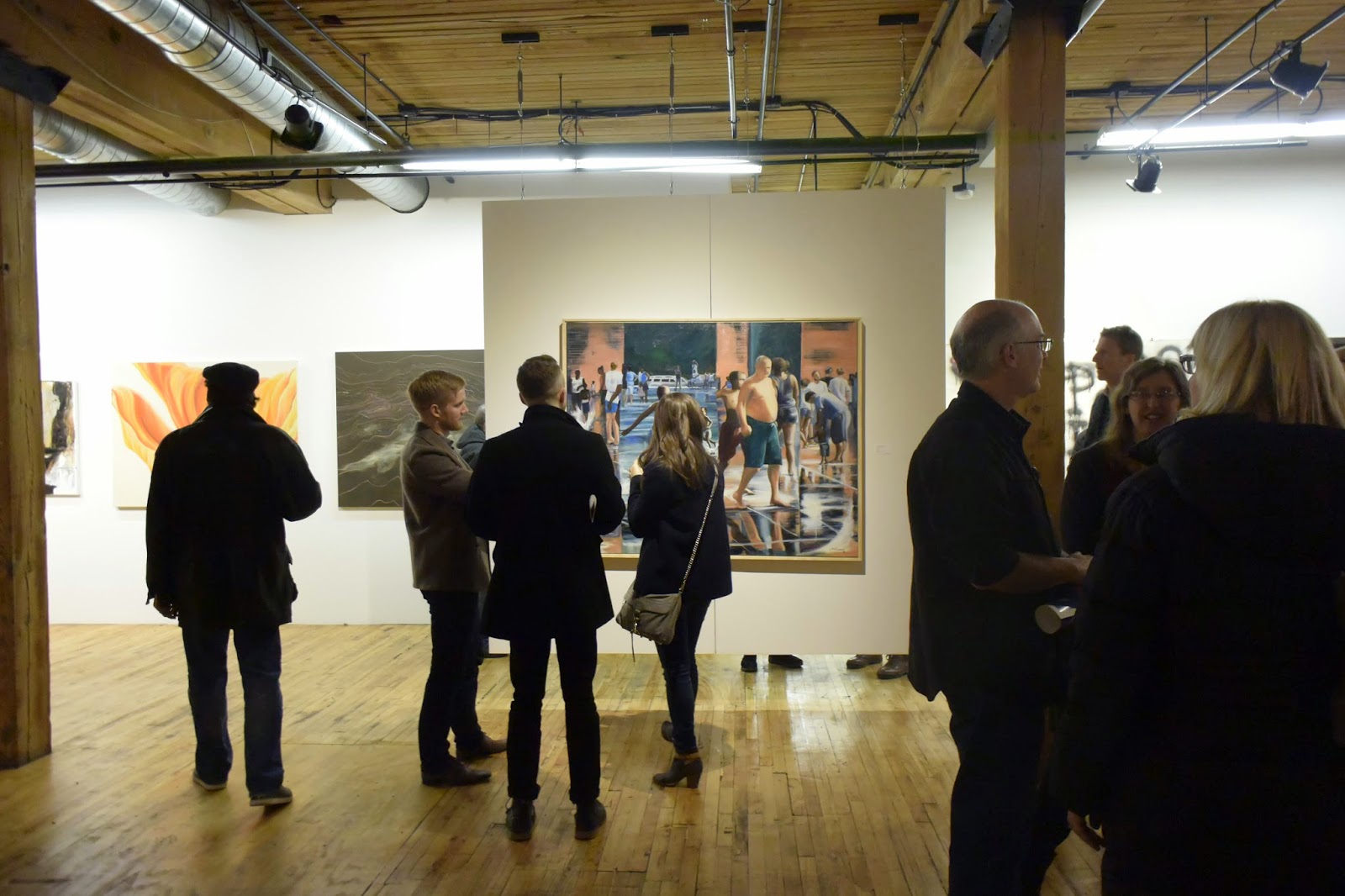 Posted by Jeanine Hill-Soldner Fine Art at 5:19 PM Links to this post

I accept all major credit cards. 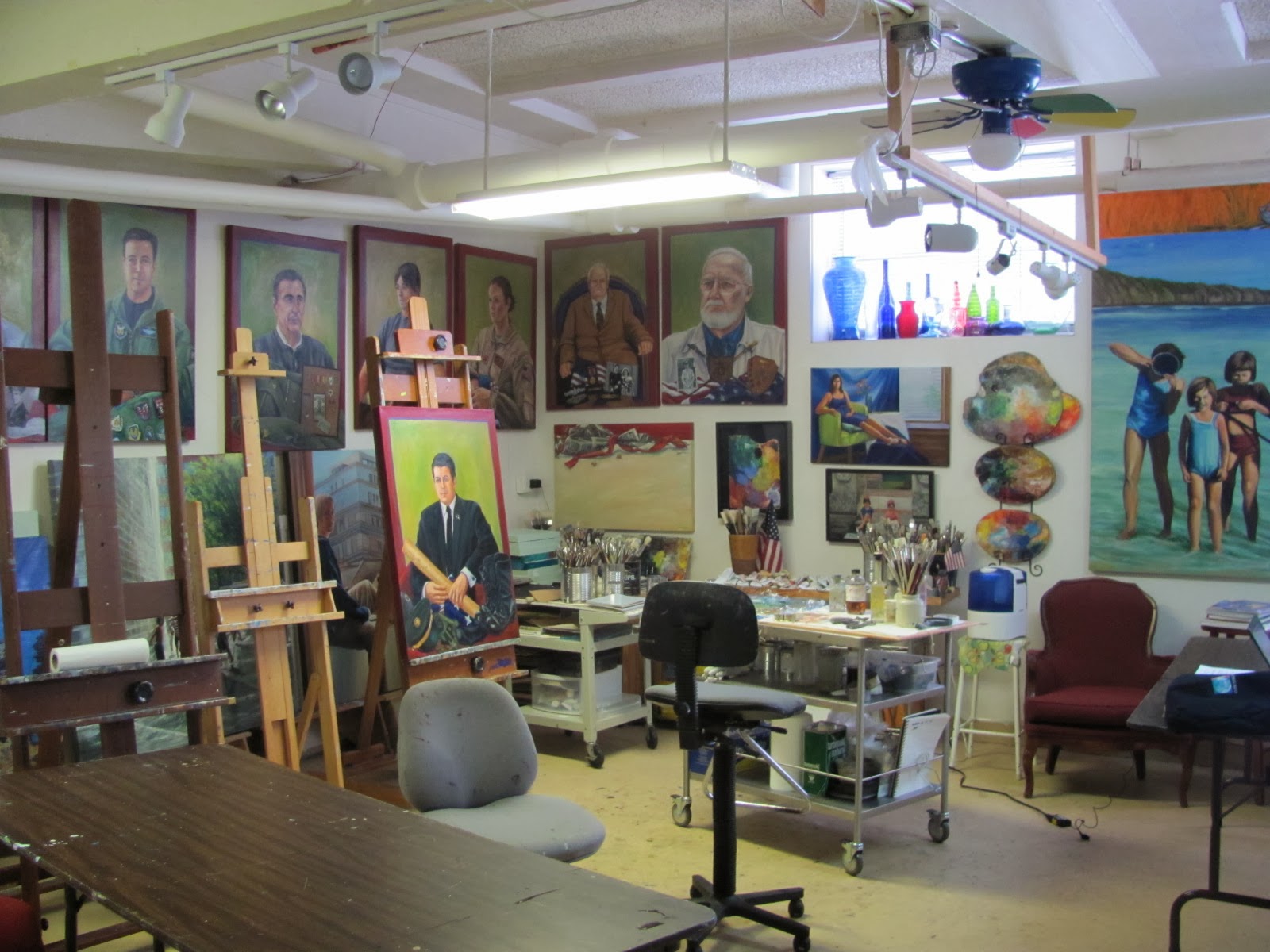 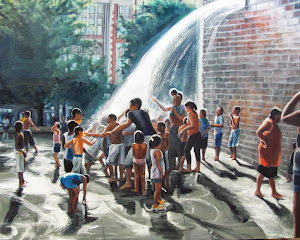